R70-77:
Time and the Gods is the second book by Irish fantasy writer Lord Dunsany, considered a major influence on the work of J. R. R. Tolkien, H. P. Lovecraft, Ursula K. Le Guin, and others.

The book was first published in hardcover by William Heinemann in September, 1906, and has been reprinted a number of times since. It was issued by the Modern Library in an unauthorized combined edition with The Book of Wonder under the latter’s title in 1918.

Dunsany had a brief preface in the original edition and added a new introduction to the 1922 edition.

The book is a series of short stories linked by Dunsany’s invented pantheon of deities who dwell in Pegāna. It was preceded by his earlier collection The Gods of Pegāna and followed by some stories in The Sword of Welleran and Other Stories.

The book was illustrated by Dunsany’s preferred artist Sidney Sime, who provided a range of black and white plates, the originals of which are still at Dunsany Castle. These were present in the 1906 and 1922 editions, not in the unauthorised collections and not in most modern reproductions.

The title is thought to have been influenced by Algernon Swinburne, who wrote the line “Time and the Gods are at strife” in his 1866 poem “Hymn to Proserpine”. 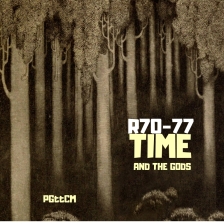 “Time and the Gods”

“The Coming of the Sea”

“The Vengeance of Men”

“The King That Was Not”

“The Cave of Kai”

“For the Honour of the Gods”

“The Secret of the Gods”

“In the Land of Time”

R75:
“The Relenting of Sardinac”

“The Jest of the Gods”

“The Dreams of the Prophet”

How’s your Weekend going? My plans are guitar practice so I suck less. #guitar #suckless #guitarpractice
This is what we have going on this next month. #cosmichorror #cthulhu #podcast #hplovecraft
No one is home, so i get to play in the kitchen. #dadrock @iyvusa @orangeamplifiers
#guitar #flyingv #bassguitars
#artichoke
Newest theme was performed on a guitar much like this one, just not as clean #iyvguitars #surfrock #spooky #guitar #newstudioguitar #tremelo